Home / About Us / Queen of the Furrow 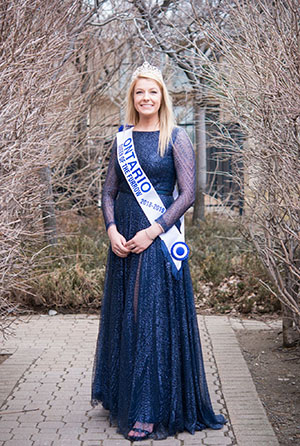 Twenty-two young women will put their agricultural knowledge, public speaking skills and plowing abilities to the test as they compete to be the next Ontario Queen of the Furrow.

Each contestant was selected by their Branch Association to represent their region at the 2019 International Plowing Match and Rural Expo (IPM) in Verner, West Nipissing – September 17 to 21.

They will spend two days with a panel of judges, with points assigned based on plowing ability, an interview with the panel, and a speech on an agricultural topic delivered on the Main Stage in front of IPM visitors, as well as appearance and deportment.

Five finalists will then be asked to give an impromptu speech during the annual Celebration of Excellence awards ceremony on Sept. 20, with the winner announced that evening.

The Ontario Queen of the Furrow will spend the next year promoting agriculture, the Ontario Plowmen’s Association (parent hosts of the IPM) and IPM 2020 at various agricultural and community events throughout the province. She will also have dignitary duties to perform during the upcoming IPM, to be held in Lindsay, Kawartha Lakes.

The Ontario Queen of the Furrow program has been part of the IPM since 1960 and is graciously sponsored by the Ontario Mutual Insurance Association.